Wig & Pen is a British themed pizza pub located on the Coralville strip, and quickly became one of our favorite restaurants. The first time we went I tried one of their “Flying Tomato” personal pan pizzas sans tomatoes because I hate the texture of tomatoes. The pizza was really good, but the Mac and Cheese on the menu also sounded very tempting. The second time we went, I tried to Mac and Cheese and dubbed it the best restaurant Mac and Cheese I’d ever eaten. So much so that I ate the entire thing in one sitting which is something I rarely do.

Since Wig & Pen was one of our favorite restaurants we decided to return there for our anniversary. Bonus that it also happened to be National Mac and Cheese Day! (What a great day to share our anniversary with right?) Since we hadn’t done as much walking that day since we’d been in the car for nearly 5 hours, we choose to walk the riverfront trail to get over to Wig & Pen. Not our best idea as it was still quite warm outside and the walk was a little longer than we anticipated given the fact that the path curved a bit.

We hooked into the trail to begin with by walking up to the Iowa Riverfront Landing where the Marriot is located. From there we took the trail south along the river, including some time walking near the dam, as well as past the outdoor seating area of the fancy Iowa River Power Restaurant. 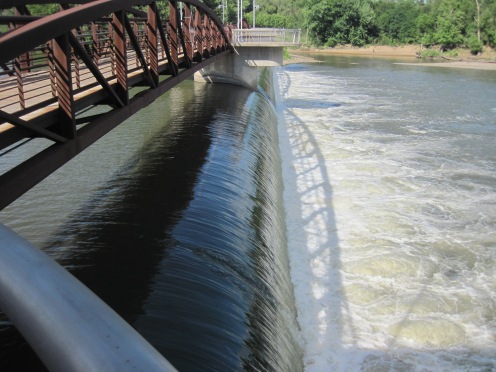 We had originally considered eating outside at the restaurant but after that hot walk all we wanted was to sit in some air conditioning for awhile. I enjoyed the British themed wall decor located by our booth.

Did I mention how awesome this oven baked Mac and Cheese is? No? Well even if I did here’s a picture or two to show you how it arrives at the table and also how much cheesy goodness is hidden under that layer of initial baked cheese. 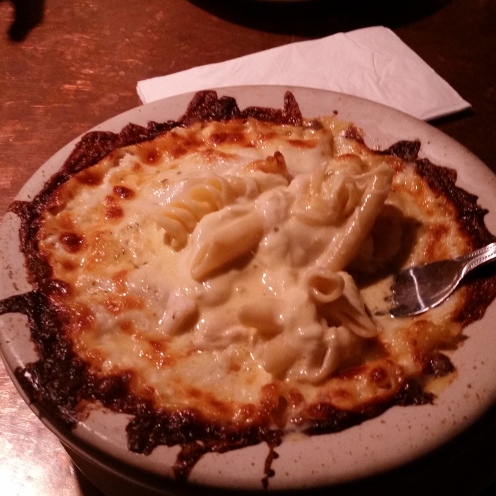 As I said, this is our favorite restaurant in the Iowa City area. They also have a location on the East side of Iowa City that does carry out only for their pizzas. No matter what, if you go, plan to have it be for a longer time as good food takes a decent amount of time to cook!