Following a late lunch at Fitz’s, my sister and I spent some time back at the hotel enjoying the outdoor pool in the over 100 degree temps! We weren’t overly hungry when it was time to head out for dinner that night. We had a performance to take in at the Muny that night, and wanted to make sure we got there with time to find our seats, so we ate an early dinner around 5:00pm at Hodak’s.

The great thing about Hodak’s is there is a ton of parking in a lot nearby. The not so great part is it doesn’t feel like a very safe part of the city. It’s located right next to some kind of industrial work place with big garage doors, so not exactly tourist central. However, this place is a huge hit with the locals and has been around for years. They are known for their fried chicken. Andrew and I had been previously with an elderly couple from church who frequently visit on Sundays when you can get a full chicken dinner and two sides for super cheap.

As I said, we weren’t overly hungry so my sister and I decided to just share and order of wings and a side a fries. Our waiter was a wonderful older gentleman who was full of jokes. He gave us both a hard time about checking our phones. We explained that we were checking in with our husbands as we were traveling for the week. We got to talking about where we were from and it turns out the locals sitting across from us had connections to Iowa. It was fun to feel like we were fitting in with the locals who clearly came the same time every week. 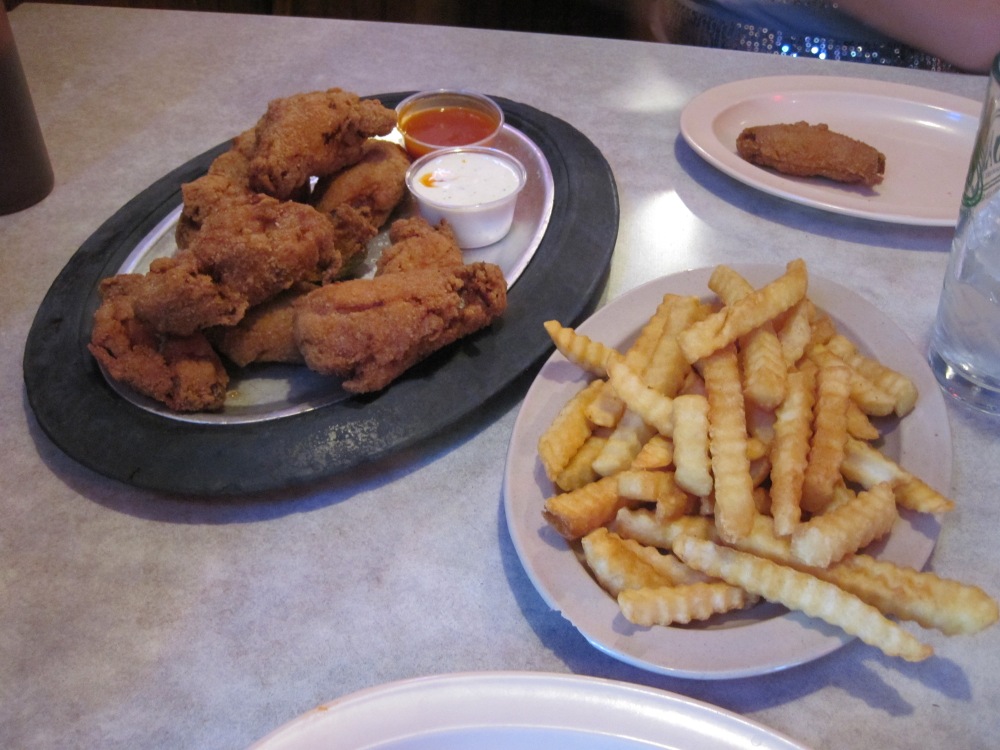 Our food arrived rather quick given we were there pretty early. As you can see this was more than enough food for two people who had filled up on lunch just a few hours before. After finishing everything off, our waiter came by to ask if we wanted dessert and to inform us that the locals who had been sitting across from us had picked up our bill. That sure was a pleasant surprise!

My sister still claims this as one of her favorite meals of the trip. As far as fried chicken goes, it is right up there in my top places to go for chicken, plus the friendly atmosphere just can’t be beat!

Our final stop for the day was The Muny. The Muny is located in Forest Park and is a huge outdoor theater. Andrew and I previously have seen “Beauty and the Beast” performed there. That time we waited to get into the free seats. Usually the line forms around 4pm for those, so you have to bring some kind of dinner to eat while you wait in line, or wait and get food once you are inside. That’s the great thing about the Muny! You can eat during a Broadway show performance! You can also bring your own food in, provided it’s in a soft sided cooler and you have non-alcoholic drinks in plastic bottles. Each summer they produce 7 different musicals that are performed for roughly a week each.

If you don’t want to wait for free seats, you can reserve tickets ahead of time, or buy some the night of, provided they still have seats left. They tend to have one show geared more towards families each summer and that one tends to sell out! We had bought our tickets for this night’s performance a few weeks prior and had picked up our tickets at the will call booth earlier in the day. This made it super easy for us to park on the upper end later on where there is more parking and a closer lot than on the bottom end where the ticket booths are.

The seats of course vary in price depending on how close to the stage you are sitting. We purchased the cheapest seats, which put us just a few rows in front of the free seats, but we still felt we could see really well, aside from the fact that the people in front of us kept leaning from side to side.

Another thing to note is that they have these giant silent fans spread throughout both sides of the audience seating that are supposed to help cool the area. Unfortunately with a heat index above 100 the entire week, it didn’t do much to help, but it did make a slight difference overall.

We really enjoyed our performance of “All Shook Up” based on the songs of Elvis. We both had seen it before in Milwaukee, WI with a Broadway touring group, but personally I enjoyed this performance of it more. Since it is a Broadway production, you can’t take any pictures during performance time, but I did managed to sneak one of the backdrop prior to the start of the show.

If you are ever traveling through St. Louis in the summer and have any interest in Broadway shows, I strongly encourage you to try to see a performance at the Muny! You won’t be disappointed! Just keep in mind that traffic leaving Forest Park afterwards is pretty crazy. It took us nearly half an hour just to leave the Park area and about another 20 minutes to get to our hotel after that!