After being in the city for nearly two days, we decided we needed a breath of fresh air away from New Orleans.  We’d been wanting to check out the gulf anyways. I mean, when you are that close, you might as well make the trip down. Our morning began at Jean Lafitte National Historical Park and Preserve, mainly the preserve portion.  We arrived early in the morning at the already humid and buggy swamp area.  We walked along the boardwalk trail in hopes of seeing an alligator in the normal spot, but just saw a few swamp birds.  We also walked along another trail and again saw lots of birds and a number of giant grasshoppers that I could have lived without.  Bugs don’t normally bother me much, but these grasshoppers were real nasty looking! We didn’t see any alligators but part of me is quite alright with that. I’m not sure I’d really want to see one in the wild anyways!

After that we got into the car, and drove two hours down to Grand Isle State Park to visit the Gulf.  Imagine our disappointment when after two hours of driving and grabbing Subway for a picnic lunch, we pull in and see a red and purple flag flying. Dangerous current and dangerous aquatic wildlife. Swimming was not advised. However we did meet our goal of seeing the gulf and enjoyed a nice picnic on the shore. Plus we did brave it enough to stick our feet in to say we’d stepped in the gulf. We were just about ready to head back to the car after about half an hour of sitting on the shore, when we decided to just walk out on the pier for one last view. That’s when we saw the dolphin pod. At least 10 dolphins all swimming right past us on the end of the pier. Needless to say that made the 4 hours in the car worth it for us! We also enjoyed some nice views from the observation tower there. 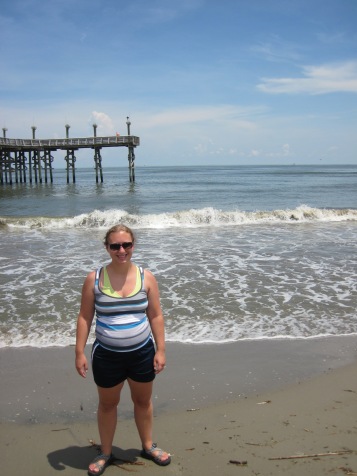 On our drive back we got stuck in a torrential rainstorm. The worst either of us have ever experienced, and that’s saying something because I’ve been to Florida a few times. We pulled off outside a little bar and waited it out in the car. When we finally hit the outskirts of New Orleans, we decided to stop and eat at a B-dub’s because our nerves were just that shot by then. We didn’t feel like driving into the French Quarter for any authentic food at that point! And when we returned to the hotel, our swimming pool was finally back up and running, so we got to relax in the pool as well!